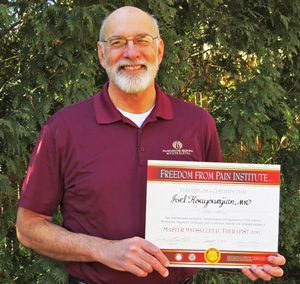 Joel is a New Hampshire and New York State Licensed Massage Therapist. He is a graduate of the Finger Lakes School of Massage near Cornell University in Ithaca, New York. Mr. Kouyoumjian also holds certificates for orthopedic massage through the Benjamin Institute for Advanced Studies in Cambridge, Massachusetts. Bodywork is a second career for Joel. His interest in massage stems from his worldwide travels over the span of forty years as a US Merchant Marine ship captain.

He came to learn the Myoskeletal Alignment Techniques in part because he recognized his penchant for troubleshooting and MAT lets practitioners apply that skill to bodywork. Joel also recognized how so many people in the New England area would benefit from Erik Dalton’s Myoskeletal Therapy and there simply wasn’t anyone doing it. After earning his advanced certification in MAT, he opened his Manchester-Bedford Myoskeletal LLC clinic to do just that — help people through ways that simply made sense to him.

Joel is originally from Massachusetts. His sea-going career moved him around the country, living on the US east and west coasts, Scotland, and the British Virgin Islands before finally setting down roots here in New Hampshire in 2009.

Away from manual therapy, the Captain rock climbs at indoor gyms in the Manchester area when he can. Joel started learning Aikido in the early 1970’s before a knee injury put an end to his martial arts ambitions. Recently, he’s taken an interest in the American Eagle Cane Style of self-defense. His long-standing connection to the Far East continues as a caretaker of bonsai.