What is Sacral Torsion?

The following is an excerpt written by Jerry Hesch from chapter #11 of  Erik Dalton’s book, Dynamic Body: Exploring Form Expanding Function, which features guest contributions from some of the leading thought leaders and practitioners in the massage profession. The rest of the chapter can be read in the Dynamic Body textbook, available as part of the Dynamic Lower Body home study course or as a standalone purchase.

This is an in-depth exploration of sacral torsion and sacroiliac joint dysfunction. It presents a model of nomenclature, evaluation, and treatment that is much more user-friendly than the traditional model.

Due to the proximity of the lumbar and sacral nerve supply, pain patterns can be unclear. True SIJ pain is not always clearly demarcated. Furthermore, the SIJ and lumbar spine are inextricably linked and, therefore, I deny distinct and separate SIJD without lumbar segmental involvement. In contradistinction to much of the general literature, asymmetry is not a necessary prerequisite for the definition of SIJD, as symmetrical and treatable hypomobilities and hypermobilities do exist.

A frequently reported sacral movement dysfunction is named “sacral torsion about an oblique axis,” which is also known as “sacral torsion,” or simply as a “torsion.”1,2 (Image 1.) Torsions do meet the above definition of SIJD, and they are the focus of this chapter. I also include my method of evaluation and treatment for sacral torsions. There are other axes and other types of sacral dysfunction that will not be discussed. These include forward-bending and backward-bending restriction, pure rotation on a vertical axis, pure side-bending, and posterior glide.

Some patterns that might be predicted do not actually appear to exist, or are extremely rare, such as anterior glide, side-glide, and dorsal plane tilt (imagine a pinwheel axis to differentiate from side-bending). My work is a distinct enhancement from the traditional evaluation and treatment paradigm, and is, therefore, referred to as the Hesch Method.

A sacral torsion is a pattern of traumatic, symptomatic, sacral asymmetry with altered movement in the SIJ and lumbosacral joints. It is described in many works on osteopathic-based biomechanics of the SIJ 3-8 and also in some physical therapy texts.9,10 Typical works on manual medicine, manual therapy, and muscle energy technique (MET) often address SIJD and torsion. In the SIJ, torsion is a type of dysfunction in which the sacrum is described as becoming stuck while moving within the ilia about the left or right physiologic oblique axes (Image 1.).10,11 Therefore, torsion can also appropriately be referenced as a sacral “fixation or restriction.” There are a total of four types of torsion:

Oftentimes abbreviated as L on L, R on R, R on L, L on R. The nomenclature will be addressed in detail later in the chapter.

It may seem counterintuitive and somewhat paradoxical, but the sacrum can actually go further into the direction of fixation. However, it cannot move back to physiological neutral or beyond it into the opposite direction without a corrective maneuver. This phenomenon is explained as obeying the Rule of Physiological Motion (dysfunction). The rule defines physiological motions as those motions that are normal based on the design of the structure. For example, the knee primarily flexes and extends and slightly rotates during gait, and these are physiological motions. A lateral blow to the knee induces a valgus movement which is un-physiological.

In spite of the fact that torsions obey this rule, I believe they are not a normative physiological motion, such as part of the gait cycle, per osteopathic theory as described by Dr. Philip E. Greenman,12 former professor of osteopathic manipulative medicine, as well as physical medicine and rehabilitation, at the Michigan State University College of Osteopathic Medicine, and in most other works on the subject. Rather, it takes a large passive, extrinsic force, in addition to vulnerable positioning, to induce torsional movements and fixations – for example, lifting a heavy object with the spine in full flexion, rotation, and side-bending.

It is noteworthy that the concept of torsion is either trivialized, without justification, or completely omitted in several traditional works and in contemporary works on manual therapy, including physical therapy and sports medicine literature.13-22 Although torsion may be absent or minimized, these works do address the general concept of SIJD.

A few manual medicine practitioners, such as Dr. John F. Bourdillon 23 and Dr. Karel Lewit,24 do not endorse a torsion model. Also, a remarkably detailed textbook on joints, Joint Structure & Function: A Comprehensive Analysis, briefly covers the SIJ in less than four pages, but avoids sacral torsions.25 Another thorough textbook, Kinesiology of the Musculoskeletal System: Foundations for Physical Rehabilitation, also limits explanation of sacral motion to nutation and counter nutation.26 The topic of sacral motion is limited to a single page.

Both these textbooks hold a prominent location in my library. If published clinical and basic science studies existed that showed the validity of torsion motion, and utility of treatment for torsion, I believe that these ver thorough texts would then appropriately expand the sections on sacral mechanics. This knowledge gap is a valid clarion call for novel research. Both the above textbooks have an especially strong and relevant explanation of the relationship of the pelvis to the hip and lumbar spine, and the reverse thereof. This description is welcomed by clinicians who perceive pelvic pathomechanics as distinctly different from SIJ movement dysfunction.

Donald A. Neumann, professor of physical therapy at Marquette University, clearly states the problem of the SIJ concept in physical therapy: “Adding to the clinical ambiguity of the sacroiliac is the lack of standard terminology to describe the related anatomy and kinesiology. As a result, the biomechanical and clinical importance of the SIJ is often understated or exaggerated.”27

SIJDs can be difficult to diagnose, which can lead to confusion among practitioners. Some who acknowledge SIJD have even begun to doubt the very existence of sacral torsions. Torsions frequently coexist with low back pain, making them difficult to isolate as the underlying issue. Proximal spasm and postural aberration can give the appearance of a primary lumbar or lumbosacral dysfunction, whereas any occulted torsion will be more apparent in a fully flexed posture. On the other hand, many clients are misdiagnosed with SIJD when they are actually experiencing spasms or shortened soft tissues. These tissues can impact the posture and movement of the entire pelvis, hip, and lumbar spine. However, these asymmetries of posture and movement do not necessarily equate to a faulty fixation within the true SIJ.28,29

Two authors make noteworthy contributions to torsion theory in contrast to most writings, which simply reiterate the traditional theory and treatment without much debate. Osteopathic physician Dr. Myron C. Beal questioned the entire concept of torsions quite some time ago,30, while another osteopathic physician, Dr. Theodore R. Jordan, suggests replacing the joint fixation model with a soft tissue asymmetry model, based on the segmented innervation of the multifidi muscles.31

In contrast to Beal and Jordan, I believe that torsion is, in fact, a valid movement dysfunction of the SIJ, and that the lumbosacral facet motion is also altered. I believe this motion is significantly restricted, such that “lumbosacral-sacroiliac joint torsion” might be much more accurate than “sacroiliac torsion.” This complex pattern is worthy of being understood and applied, as opposed to being avoided completely. Unfortunately, as we have seen, SIJD, and especially torsions, tend to be esoteric for the majority. Therefore, more research is required to make SIJD diagnoses more accurate.

In his text Principles of Manual Medicine, Greenman summarized the challenge of the torsion concept with this statement: “Fortunately, biomechanical research into the pelvic girdle is increasing, and as new knowledge is acquired, the theoretical construct provided here may well need modification. Though the exact biomechanics of the torsional movements of the sacrum are unknown, the hypothetical left and right oblique axes are useful for descriptive purposes.”32

Torsion is difficult to visualize

Several clinicians note that torsions present visual complexity. Physical therapist Allyn L. Woerman33 asserts, “sacral torsions are perhaps the hardest dysfunction to conceptualize,” which I readily affirm. Sacral torsion is a tri-plane movement dysfunction of the sacrum about an oblique axis. The axes are tri-planar, therefore, the motions about the axes are complex and difficult to visualize. The primary motion is left or right rotation, occurring in the transverse plane. Sagittal plane flexion and extension and frontal plane side-bending are all lesser torsion motions. Flexion/extension and rotation are additive, such that the most obvious asymmetry of the sacrum will be that one sacral quadrant is notably posterior to the other three quadrants. The side-bending component is discernible, although more subtle. In any given anatomical structure, three-dimensional biomechanics are both complex and challenging to visualize. In fact, the majority of clinicians typically evaluate motion one plane at a time. Perhaps a square lettered block, a child’s educational toy that is symmetrical at rest, is somewhat easier to visualize as making a positional change along an oblique axis (Image 2.)

Over the course of his career, Dr. Jerry Hesch, DPT, MHS, PT has developed a whole body approach to evaluation and treatment of connective tissues and joint dysfunction known as the Hesch Method. Dr. Jerry Hesch has published and taught courses on evaluation and treatment which he has developed on every joint of the body including foot and ankle, knee, hip and pelvic girdle, low back, upper back and ribs, neck, shoulder and upper extremity, and TMJ. The goal of the Hesch Method is to provide an alternative to ineffective long-term treatment commonly referred to as the “treatment roller coaster.”  The Hesch Institute in Aurora, Colorado (near Denver) improves the quality of life for pain sufferers from all over the world. www.heschinstitute.com

The following is an excerpt written by Thomas Myers from chapter #10 of  Erik Dalton’s book, Dynamic Body: Exploring Form Expanding Function, which features guest contributions from some of the leading thought leaders and practitioners in the massage profession. The rest of the chapter can be read in the Dynamic Body textbook, available as part of the Dynamic Lower Body home study course or as a standalone purchase. 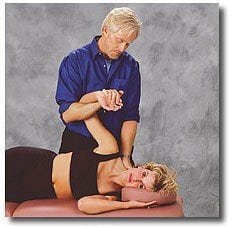 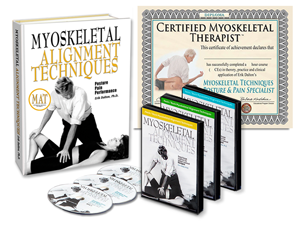 The Myoskeletal course that started it all…