Tight muscles create asymmetry and weak muscles permit asymmetry in both the myofascial and skeletal systems. Deep, intrinsic muscles and the body’s bony framework are inseparable: What affects one always affects the other. Until the therapist develops a basic understanding of how deep tissue techniques affect mobility/stability in the bony framework, random deep tissue work is contraindicated.

Massage and bodyworkers who specialize in chronic pain and postural problems profit by studying spinal biomechanics and learning to focus therapeutic intent on both myofascial and spine-related (articular) structures.

Poor joint function and accompanying protective muscle spasm is commonly seen in clients suffering long-term neck, upper-shoulder and arm pain. People who habitually hold a telephone with one shoulder frequently develop chronic unilateral hypertonicity in the levator scapula and splenius cervicis muscles. Because of their common attachments at the top three or four cervical transverse processes, unilateral contraction of these muscles sidebends and rotates the neck and elevates the shoulder to help secure the phone. Problems escalate as deep spinal “groove” muscles such as rotatores, multifidi, and intertransversarii (Fig. 1) react to unilateral sustained hypercontraction. When overstimulated, these fibrotic little rascals are notorious for locking facets closed on the ipsilateral side and open on the contralateral side (Fig. 2).

Picture for a moment the forward-drawn head also being pulled into right sidebending and right rotation due to combined hypercontraction in the levator and splenius cervicis muscles. As the client attempts to raise her head from a flexed to extended position, the facets on the right glide down on their inferior neighbor as they should. But the right sidebent positioning of the neck alters vertebral tracking causing the left-sided facets to “jam” as the head and neck attempt backward bending. Because the T3 facets on the left are unable to close properly, it forces the T3 transverse processes to rotate right, as illustrated in Fig. 4.

Fig. 4: With a forward drawn and right sidebent neck, the left-sided T3 facets can’t glide down on T4 during extension. As the person attempts to backbend the head and neck, the facets jam on the left causing the T3 vertebra to rotate right. Painful Rib & Vertebral “Dual Fixation”. Prolonged T3 fixation into right rotation causes the accompanying T3 rib on the left to go into internal rotation and sometimes get stuck there. Now the nagging pain begins. The mechanoreceptors in this dynamic vertebra/rib fixation begin to feed off each other creating pain-spasm-pain cycles that reflexogenically inhibit surrounding paravertebral muscles, including the rhomboids and trapezius muscles.

Retraining exercises to strengthen weakened lower shoulder stabilizers to help resist the powerful pull of the massive pectorals, are useless until both joint fixations are addressed. Between-the-blade pain resulting from this dual fixation is one of the longest lasting and most irritating joint-related problems our clients will ever experience.

To remedy this distressful situation, the fascia of splenius cervicis, levator scapula and anterior scalenes on the right must first be lengthened (Fig. 5). Use whatever technique works best for you.

Next the therapist’s left thumb palpates the lamina groove on the left and scans in an inferior direction until the bony knot of the T3 transverse process is palpated (Fig. 6). Using gentle, sustained anterior/inferior pressure, the client is instructed to inhale to a count of five, while carefully attempting to extend and left rotate her head against sustained isometric resistance from the therapist’s right hand. When the bony knot pushes back against the therapist’s resistance, a strong Golgi tendon organ release is transferred through the transverse process to the adjoining spinal rotator muscles, creating increased capsular flexibility and subsequent joint decompression.

As the client exhales, a post-isometric relaxation response further softens the muscles and joint capsules creating better vertebral tracking. Pressure from the therapist’s thumb slowly de-rotates T3 allowing the fixated facets on the left to glide down properly on their inferior neighbor. Following this technique, if an immediate softening is palpated in the surrounding spinal muscles, then the therapist has done her or his job.

NOTE: Always check to see if the rib on the left has corrected itself by lightly scanning the rib shafts with soft fingertips, superior to inferior, feeling for a bump at about T3. If a slightly bulging rib shaft is palpated, the rib is still stuck in internal rotation. With fingers or thumbs, simply release the intercostal muscles above the dysfunctional rib in a medial to lateral direction. Then apply the same basic procedure as above to align the costotransverse rib joint. Finish off the routine with a soft elbow dragging down the groove on both sides as the client extends and relaxes the head and neck. Neck, Head and Back Pain Home Study

• The therapist lengthens the splenius cervicis, levator scapula and scalenes by pinning the attachments with his or her left hand, while mobilizing the shoulder girdle with a right-arm lock. 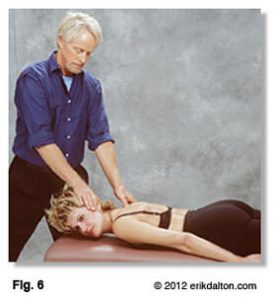 • The therapist’s thumb contacts the client’s left T3 transverse process.
• With a 10-percent effort, the client inhales while extending and left rotating her head against isometric resistance.
• As T3 attempts to rotate right, the therapist’s thumb resists this effort, causing a Golgi tendon relaxation response in the fibrotic tissues that are restricting closure of the joint. 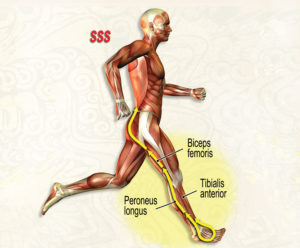 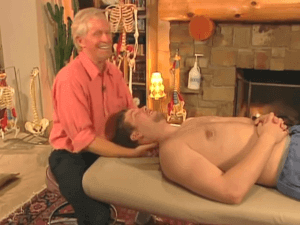