During adolescence, most of us recall our mother’s marching orders to “Stand up straight!” Fortunately, standing up straight wasn’t a problem for many: simply retract the shoulders, contract the abdominals, allow the head to come back, and lift the torso out of the pelvis. Yet for others, the act of standing upright wasn’t, and still isn’t, quite that easy — one hip may be higher than the other, one side of the rib cage lower — whatever the case, all the pelvic tucking, shoulder retracting and chin-raising are usually in vain. For these individuals, “straightening up” is a frustrating experience, like they are fighting their bodies just to get through the day.

When the general population hears the word scoliosis, the visualization of a hump-backed, crooked and painful body usually comes to mind.

It is, indeed, a frightening experience when parents receive a call from the school nurse informing them that a scoliotic “deformity” has been discovered during their child’s routine screening exam. Ten in every two hundred children develop scoliosis between the ages of 10 and 15. Although boys and girls seem equally affected, the curvatures in females are three to five times more likely to progress into more pronounced aberrant postural patterns. 1 As scoliosis is frequently asymptomatic, it is often overlooked, and the parent may only notice that the child’s clothing no longer fits properly.

Is it Fixable or Is it Fixed?

Scoliosis may be classified in a myriad of ways: by its reversibility, severity, etiology, or type and location. A primary consideration for manual therapists is the type of scoliosis … Is it “structural” or “functional?” Spinal curves that improve during forward-bending, sidebending and specific rotational movements are generally referred to as “functional” or “secondary” scoliotic curves. If the curve does not straighten during any of these maneuvers, it is considered a “structural,” “fixed” or “primary” scoliosis. Many functional curves remain in the body too long and may become fixed as the brain valiantly attempts to compensate for asymmetry by altering length-tension balance in associated soft tissues, i.e., muscle guarding. Prolonged postural compensations eventually decompensate in adjacent structures. Then the client begins experiencing increased symptoms, signs and disease.

Fortunately, scoliosis takes many forms and need not always fall into a frightful medical category. Although it can be a very complex musculoskeletal condition, successful treatment options are available if the disorder is discovered in time. This article offers an overview of scoliotic classifications, types of curvatures, accompanying symptoms, and hands-on examples for correcting the dysfunction.

Around the turn of the century, osteopathic physician Harrison Fryette introduced the “Laws of Spinal Motion” in his classic book entitled Principles of Osteopathic Technique. 2 By studying movements of cadaver spines, Fryette not only helped manual therapists understand how vertebral segments respond to normal movements but also aberrant spinal fixations such as scoliosis. Although his second law appears slightly flawed, these classic spinal biomechanical principles wonderfully detail underlying vertebral motion characteristics during the acts of forward bending, backward bending, rotation and sidebending.

Comprehension of basic joint biomechanics is fundamentally essential when assessing and treating structural and functional scoliotic clients. For example, when confronted with a right thoracic scoliosis, therapists must recognize that vertebrae at the apex of the curve are sidebending left and rotating right causing associated ribs to form a convex hump. Conversely, a lumbar scoliotic curve that sidebends right and rotates left produces bulging in the lower left torso see (Fig. 4). Formation of these distorted postures is explained in Fryette’s first law which states that lumbar and thoracic joint coupling typically occur to opposite sides.

Therapists must learn to immediately identify aberrant joint coupling responsible for these crooked patterns so hands-on activating forces can restore balance and symmetry to all affected spinal and soft tissues Hands-on approaches.

As a rule, scoliotic curves are named according to the side of the convexity. Thus, in the most commonly seen right thoracic scoliosis, the ribcage will be convex right with an accompanying posterior bulge on the right between the spinal column and scapula. When therapists encounter this knotty protruding ribcage, they usually begin digging on the thin layer of overstretched paravertebral fascia covering the bony ribs mistakenly believing they are releasing fibrotic muscles. In most instances, this well-intentioned maneuver may actually worsen the condition.

During the formation of a right thoracic scoliosis, the spinal transverse processes sidebend left and rotate right pushing the longissimus and iliocostalis erectors laterally. The weakened serratus posterior superior muscles responsible for binding the erectors close to midline, allow the erectors to spread much like the linea alba often permits rectus abdominis spreading during a mother’s third trimester of birth. When distended, compensations develop as bulging babies and protruding ribs are left with a terribly inadequate support system.

Stretch-weakened muscles, ligaments and fascia are reciprocally overpowered as hypertonic erectors on the opposite side shorten forcing the spine to “bow.” Typically, these myofascial tissues become neurologically inhibited due to joint dysfunction, trauma, overuse syndromes, faulty posture, or paralysis. In (Figure 5) the therapist’s fingers tonify stretch-weakened erectors and serratus posterior muscles with fast-paced spindle stimulating maneuvers via the dynamic gamma motoneuron system. Extended fingers then hook and reposition the laterally migrated paravertebrals back on top of the bulging ribs. To lengthen the erector spinae muscles on the concave side, the therapist reaches across with extended fingers, digs into the left lamina groove, scoops out the wiry spinalis muscles, and stretches all the erectors laterally.

Once some spinal bowing has been removed, additional ribcage flattening can be accomplished by depressing the scapula see (Fig. 6), lengthening latissimus dorsi see (Fig. 7), releasing the diaphragm and obliques see (Fig. 8), and stretching the inferior end of the transab-dominal fascial column see (Fig. 9).

Scoliotic curvatures are generally classified by four degrees of severity:

(Note: Radiologists usually allow a gray zone that represents a 5 degree range between each classification.)

Based on these facts; it seems, as with most human conditions, illogical to assume that human scoliosis would be caused by a single gene, or even by genetic factors alone. And while idiopathic scoliosis is considered to have no discernible cause, hereditary links have been established. Thus, if one child in a family presents with scoliosis, it’s well worth the time to check the others. Since this disorder can pass to offspring, parents with scoliosis should watch their children for any related signs, particularly during early teenage years.Approximately 70 percent to 90 percent of scoliosis is termed “idiopathic,” implying no known cause for the dysfunction. However, structurally trained manual therapists often find that many idiopathic scoliotic deformities labeled as fixed (irreversible) are actually compensations due to sacral or cranial base unleveling see (Fig. 10). If sacral and cranial base unleveling indeed prove to be causal factors in a portion of presumed idiopathic cases, the “no-known-cause” definition should no longer apply. Information sharing among complementary medical professionals concerning possible biomechanical and biochemical origins of scoliosis provides hope that someday many more cases will lose their idiopathic classification.

It is also possible that the term idiopathic scoliosis may become outdated, as recent studies demonstrate a clear link between scoliosis and lowered bone densities. For years, various research groups have focused on finding a “scoliosis gene” or singular cause for the disorder. Yet searching for a single solution for a complex problem may only serve to slow down the process.

Scoliosis is closely linked to low bone densities that may be influenced by a wide variety of overlapping factors that includes genes, estrogen levels, nutrition, exercise, and drugs. In animal studies, lowered bone density is known to be caused by a wide variety of conditions including lack of physical activity, pesticide exposure and nutritional deficiencies. Some of these same conditions, especially the lack of exercise and nutritional deficiencies, are known to also lower bone density in humans.4

Based on these facts; it seems, as with most human conditions, illogical to assume that human scoliosis would be caused by a single gene, or even by genetic factors alone. And while idiopathic scoliosis is considered to have no discernible cause, hereditary links have been established. Thus, if one child in a family presents with scoliosis, it’s well worth the time to check the others. Since this disorder can pass to offspring, parents with scoliosis should watch their children for any related signs, particularly during early teenage years.

Ever since Hippocrates coined the term “scoliosis” to describe deformity of the spinal column, “structural scoliosis” (the fixed type) has occupied the attention of researchers and physicians. Early treatment modalities were often crude and sometimes violent, as well-meaning practitioners would walk on the scoliotic hump or apply excessive force using homemade, full-body traction devices. Nevertheless, these pioneering therapists did develop a number of sound therapeutic principles that still constitute essential features of many modern treatments, including:

Structural scoliosis as a physical deformity is often accompanied by functional changes in the thoracic and abdominal organs as well as psychological and emotional disturbances. The extent of functional change in the heart, lungs, and other viscera is in direct proportion to the degree of the physical deformity. From puberty through middle age, scoliotic symptoms such as backaches, head/neck pain, arthritic symptoms, chest pain, and organ dysfunction cause people to seek help.

“Nonstructural” or “functional” scoliosis refers to a structurally normal spine that appears curved. This condition can be a temporary abnormality — caused by various conditions — leg length inequality, spasmodic muscles, or inflammatory conditions such as appendicitis. Although the disorder is considered temporary, proper muscle and spinal biomechanical approaches are often needed to address the underlying imbalance pattern.

Functional scoliosis is characterized by an asymmetric position of the trunk and back that usually diminishes during forward bending, sidebending, rotational, or tractioning maneuvers. Functional scoliotic cases are frequently accompanied by other signs of faulty and relaxed posture, such as rounded shoulders, prominent abdomen and flat feet see (Fig. 11). Occurring with equal frequency in boys and girls, functional cases appear in a large percentage of all school-age children as well as adults.

People presenting with crooked spines commonly suffer from a condition termed rotoscoliosis where the base of the spine “corkscrews” headward as the vertebral column turns on its axis see (Fig. 12). These coronal deviations often result from leg length discrepancy or pelvic imbalances.

An interesting note: Functional scoliosis is a physiologic posture that can be assumed by any “normal” child or adult simply by bearing more weight on one leg while standing. It is pathologic only if it becomes habitual. One may justifiably assume the existence of a constitutional defect in muscles, ligaments, body alignment, nutrition, or structure of the bones. Such a deficiency explains why, for instance, some people naturally sit and stand erectly, while others may tend to slouch and slump — whether sitting, walking, or standing.

Pain management therapists are often presented with a predictable functional scoliotic postural pattern that closely follows the description in (Fig. 13). If seen from the back, the following asymmetries are exhibited: 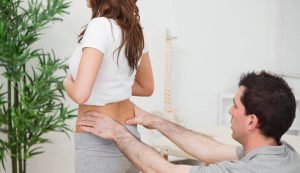 MAT benefits both clients and therapists

Increase Your Salary as a Massage Therapist Through CE