From  Motion Is Lotion course

In last week’s Technique Tuesday newsletter we assessed the neck firing order pattern using the Head Raise Test. As discussed in that article, the two hypertonic muscles that often substitute for longis capitis/colli during this test are anterior scalenes and sternocleidomastoid. The resulting altered firing order pattern not only contributes to head forward postures and upper chest breathing, but may also cause the scalenes to jack up the first rib leading to symptoms ranging from neck and jaw pain to arm numbness.

Oddly, the first rib is seldom evaluated, and is therefore often missed as a contributor to neck, shoulder and arm pain. It is essential that your client’s first ribs (left and right) move properly to ensure optimal functioning of the scalene musculature. Mechanically, when the scalenes contract on one side, they flex the neck a bit to the same side and elevate the first rib. Should the first rib be fixated and unable to move properly, smooth cervical sidebending and rotation are altered. 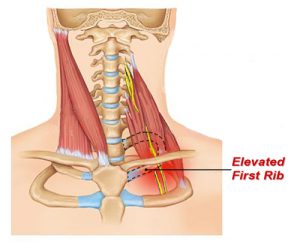 In workshops, I teach a hands-on assessment for superiorly fixated first ribs, yet in most cases all one has to do is look up and over a shoulder to test for lack of mobility. For example, if we want to see if the right first rib could be fixated, the client would extend and left rotate their head while right sidebending the neck. An inability to achieve proper movement when performing this motion is indicative of a first rib fixation and accompanying scalene reactive spasm. Additionally, the client will often feel stiff and sore at the base of the neck during this maneuver.
As we all know, direct manual therapy techniques for tight anterior scalenes can often be difficult to perform due to the proximity of arteries and nerve bundles, so to avoid these issues, I use the Myoskeletal “bones-as-levers” principle to release scalene hypertonicity. In the accompanying video and technique description below, I first position the client’s head so the scalenes are taut and then use soft finger pads to hold the rib down as I apply a gentle graded exposure stretch to the anterior scalenes.

For the sake of a shortened discussion here, I did not evaluate and correct other problems that are often co-present with a fixated first rib, but keep in mind that if one segment is affected, restriction of an adjacent structure is also suspected. Associated myogenic issues may include reactive spasm in levator scapulae, pectoralis minor, serratus anterior as well as altered function of the acromioclavicular, sternoclavicular, glenohumeral and thoracic spinal joints. Emotional stressors also play a big role in first rib fixation and scalenes spasm. Once the midbrain and cerebellum map abnormal movement patterns, manual therapy techniques to correct the fixation may only be a temporary quick fix. In chronic cases, the client must be given home retraining exercises that mimic the technique shown below. Additionally, the client should be taught new movement patterns to address suboptimal postural issues that may have contributed to the first rib fixation in the first place. 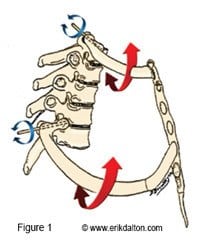 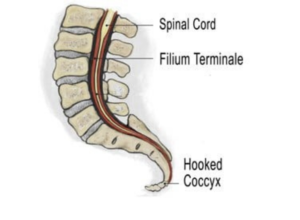 Coccyx The Seat of the Soul

The Miracle of Motherhood