Engaging the Brain and Freeing the Fascia with Myoskeletal Enhancers

According to Cambridge Dictionary, the verb enhance means “to improve the quality, amount or strength of something.” Similarly, in Myoskeletal Alignment Techniques (MAT), the term enhancer is used as a noun to describe a therapist-directed movement cue that neurologically boosts, intensifies, and heightens a therapeutic outcome. In Figure 1, I demonstrate a MAT enhancer for a client presenting with excessive thoracic kyphosis and upper crossed syndrome. Adding the enhancer to her MAT treatment boosted the involvement of her nervous system, allowing better rib-cage mobility, shoulder-girdle stability, and fascial front line extensibility. To help retrain her brain for this new posture, she was asked to perform the enhancer daily, preferably in front of a mirror. 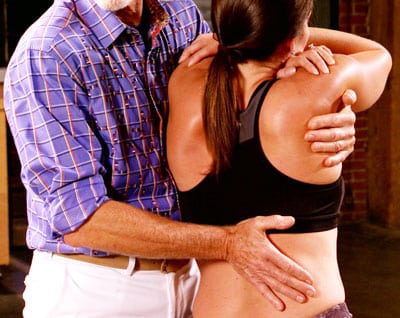 Ben was referred by an orthopedist for soft-tissue damage sustained in a rare side-to-side whiplash injury six months earlier, when his car was hit on the driver’s door (Fig. 2). The neck pain had subsided, but he could barely turn his head left and was prohibited from driving until the rotation issue was corrected. Upon seated examination, his passive range into right cervical rotation, flexion, and extension was normal, but we could only manage 30 degrees of left rotation. A couple myoskeletal enhancers were used to determine if his primary restrictor was neural (protective guarding) or the result of residual soft-tissue damage. In many pain-free whiplash clients, the neck becomes sensitized, as the brain still perceives threat even after the area has healed. In some cases, the use of novel movement enhancers can trick the brain into “loosening the reins” and dissolving the protective muscle guarding. Here’s a description of one of my favorite MAT enhancers that helped Ben.

Treatment began by slowly left rotating Ben’s head to the first restrictive barrier and holding it there. His movement enhancer was to deeply inhale and slowly right rotate his shoulders and torso as far as comfortably possible several times and relax. Essentially, this maneuver is the same as asking him to turn his head left, but Ben’s brain did not perceive the torso-twist enhancer as threatening, and through graded exposure (pain-free repetition), his flexibility did improve. Then it was time to deal with the right-sided sternocleidomastoid (SCM) and upper-trapezius contractures that were visible as Ben turned to end-range. Fig. 3 demonstrates a basic, but effective, MAT contracture routine that was chosen to conclude his first session.

When Ben returned the following week, he was asked to demonstrate the torso-twist enhancer I’d ask him to practice daily in front of a mirror. I was impressed with his progress but still observed strain in his SCM and at the base of his skull as he left rotated to end-range. Notice in Fig. 4 how my soft finger pads remain stationary, allowing Ben to left rotate at his tolerance level, and in Fig. 5 how I use an optic-nerve enhancer via the suboccipital muscles to help align the atlas-axis joint.

During the three weeks of Ben’s treatment, I experimented with many myoskeletal techniques and enhancers, but those described in this article proved to be the most effective. Ben’s commitment to his MAT enhancer homework was a big plus in his recovery, which shortened his time with me and got him back behind the wheel.

What the heck is Erik Dalton holding? 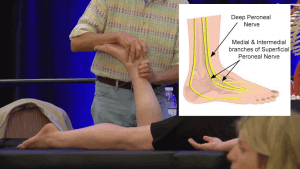 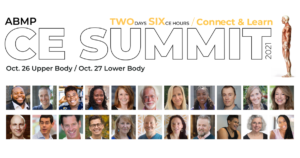