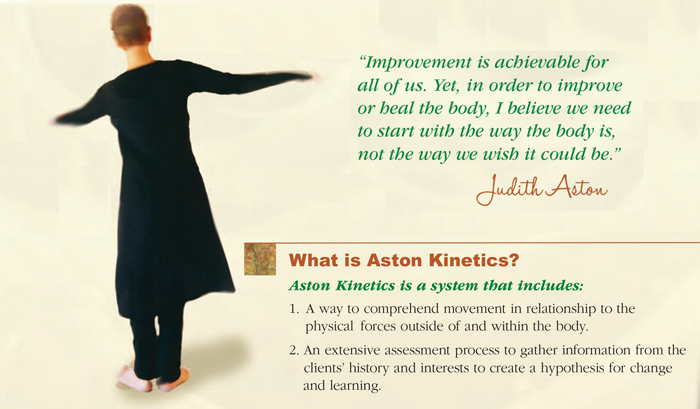 Aston Fitness is a collection of movement forms that are designed to help balance the body and achieve a more integrated neutral.

It involves using movement to strengthen and tone muscles that are working less optimally, loosen or relax areas that are overworking, and stretch areas that are tight. The rather obvious purpose is to achieve a better balance in the body and work toward more cooperative movement.

Sometimes popular fitness programs can lock the body into specific holding patterns or limitations, which can actually increase a client’s tension and move them further away from optimal neutral. Aston Fitness, on the other hand, leverages the Aston concepts of neutral, GRF, gravity, BOS, and cooperative motion to strengthen patterns that move the body closer to optimal neutral.

For example, in Aston Fitness, careful attention is paid to a neutral alignment as a point of departure for the actions, so that the part that is being strengthened is not compromising another part. The use of cooperative movement through the whole body actively supports the part being strengthened and maintains the dimension of the whole.

In addition, in Aston Fitness, gravity and GRF are always used continuously in a recycling and alternating manner. Depending on the emphasis needed – for loosening or for toning and stretching – one of the forces will be emphasized to add assistance or resistance.

Finding a neutral alignment and adding GRF to a specific motion elongates the body in that direction and accurately shows exactly where the limitations are. Traditional stretches sometimes target tissue at the apex of an angle of motion and do not reach the length of that tissue as it extends proximal and distal from that given point. When starting from a neutral posture and adding controlled motion in a given direction, the stretch occurs over the whole length of the given tissue. Adding a push from GRF in the same direction can gently and safely increase the stretch on the tissue without overstretching one part.

These fitness concepts can be applied across multiple fitness systems. After several decades of teaching these concepts to numerous health and fitness instructors, I saw the need to create formal certification programs. The Aston system now offers fitness certifications for instructors in general fitness, senior fitness, yoga, and pilates. 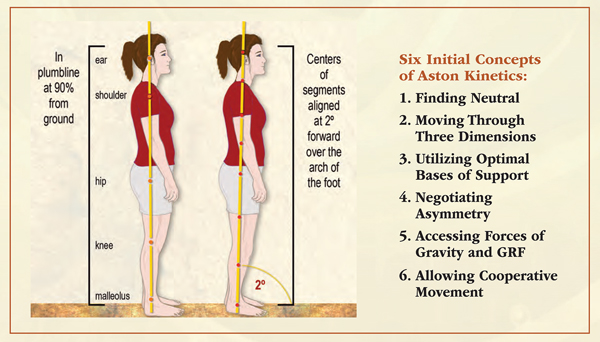 Save 30% off the Posture Pain Performance course - Home Study Version!

Discover the foundational principles behind MAT technique as we take you on an in-depth look at the connection between pain, posture and function. Save 30% off the Posture Pain Performance course - Home Study version this week only. Offer expires August 10th.  Click the button below for more information and to purchase the course for CE hours and a certificate of completion to display in your office. 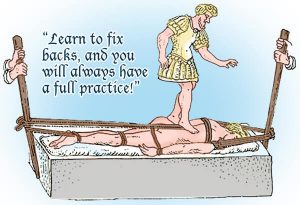 Was Hippocrates Right About Scoliosis?

What’s so great about Long Legs?